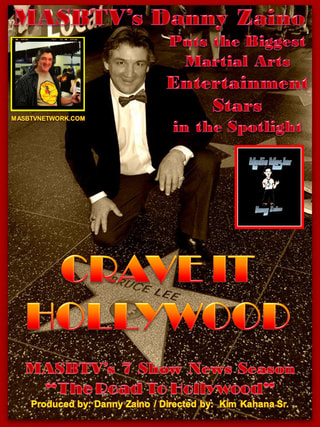 Actor, TV/Radio Host and Hand to Hand Combat Fight Coordinator for the movie and television industry was born on August 2, 1960 and is originally from Long Island, New York. He began his Martial Arts studies in Palm Beach Gardens, Florida at the age of fifteen with the local YMCA. Dabbling in the arts of Kang Do Kwon Tae Kwon Do and GoJu-Ryu, Danny began serious training after High School when he joined the United States Army as a Military Police Officer. Stationed in Korea on the DMZ he studied the art of Moo Do Kwon Tae Kwon Do.  After 13 months he was transferred to Ft. Bliss, Texas where he joined the US Army Karate Team and became a member of the Black Knight Karate Association studying the art of Japanese GoJu-Ryu. During this time he competed and performed extensively on the International level. Upon completion of his military service he became a Florida Law Enforcement Officer and earned the title of "Kumite Champion" at the Florida Police Olympics in 1984. With over four decades of dedication to the Martial Arts Danny has accomplished more than he ever could have dreamed of taking his martial arts skills to the next level and beyond.

​
In 1998 he received one of many "Hall of Fame" awards for "Innovative Weapon Design of the Year" for his "Pure Warrior" Sports Tonfa designed with competition in mind and was also awarded numerous times for "Promoter of the Year" along with his wife Theresa Zaino for their "Battle of the Arts" National Martial Arts Championships. From 2000 to 2008 he ran one of the top martial arts teams in the United States "National Team Pepsi Show Team", sponsored by Pepsi Americas known for their unique and entertaining Martial Arts shows in which they received numerous awards for their performances and competitions around the United States. In 2009 the team was changed to "Team Americas".
​
Today he is the CEO of his own Production Company "Living the Dream Productions, Inc." which produces the online MASBTV NETWORK to include the Online Reality Based News Show "MARTIAL ARTS SHOW BIZ TV" in which he is the Executive Producer & Host, "MARTIAL ARTS ENTERTAINMENT RADIO" where is the the Co Host of "The Danny & Theresa Zaino's Martial Arts Radio Hour" and "MARTIAL ARTS ENTERTAINMENT MAGAZINE" which he helps to co edit. Danny is also the Founder of his own "American GoJu-Ryu Karate & Kobudo Federation" and currently holds the rank of 9th degree Black Belt.